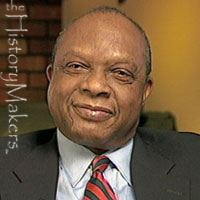 Rufus William McKinney was born in Jonesboro, Arkansas, on August 6, 1930. McKinney was one of thirteen children born to his parents, a minister and a homemaker. After graduating from Booker T. Washington High School in Jonesboro, McKinney attended Arkansas AM&N College, earning his B.S. in 1953. He then entered the Indiana University Law School and earned the J.D. in 1956.

Following his graduation from law school, McKinney was hired by the United States Department of Labor as an attorney. He remained with the Department for thirteen years and joined law department of Pacific Lighting Corporation in Los Angeles in 1969. Within two years he had risen to the position of senior attorney. In 1972, McKinney was assigned to Washington D.C. as assistant vice president and special counsel for the company, and in 1975 he was named vice president for national public affairs for Southern California Gas Company, the principal subsidiary of Pacific Lighting Corporation. He remained in charge of the Washington office of the company until his retirement in 1992.

McKinney has been active outside of his career as well. While serving with the Department of Labor, he became vice president and member of the board of directors of the Washington, D.C. chapter of the NAACP, a position he held until 1969. In 1977, he co-founded the American Association of Blacks in Energy (AABE), serving as chairman from 1980 to 1982, and remaining active on the board of directors since. The AABE organization is devoted to ensuring that minority voices are heard when energy policy is deliberated. McKinney also served as a member of the Maryland Commission on Human Relations from 1996 to 2003 and is a member of Epsilon Boule, Sigma Pi Phi Fraternity. McKinney has been admitted to the bar in Indiana and California. In 2002, McKinney was inducted into Indiana University Law School's Academy of Law Alumni Fellows, and he recently published his book, Beating the Odds. McKinney and his wife, Glendonia, live in Bethesda, Maryland and have four adult children.