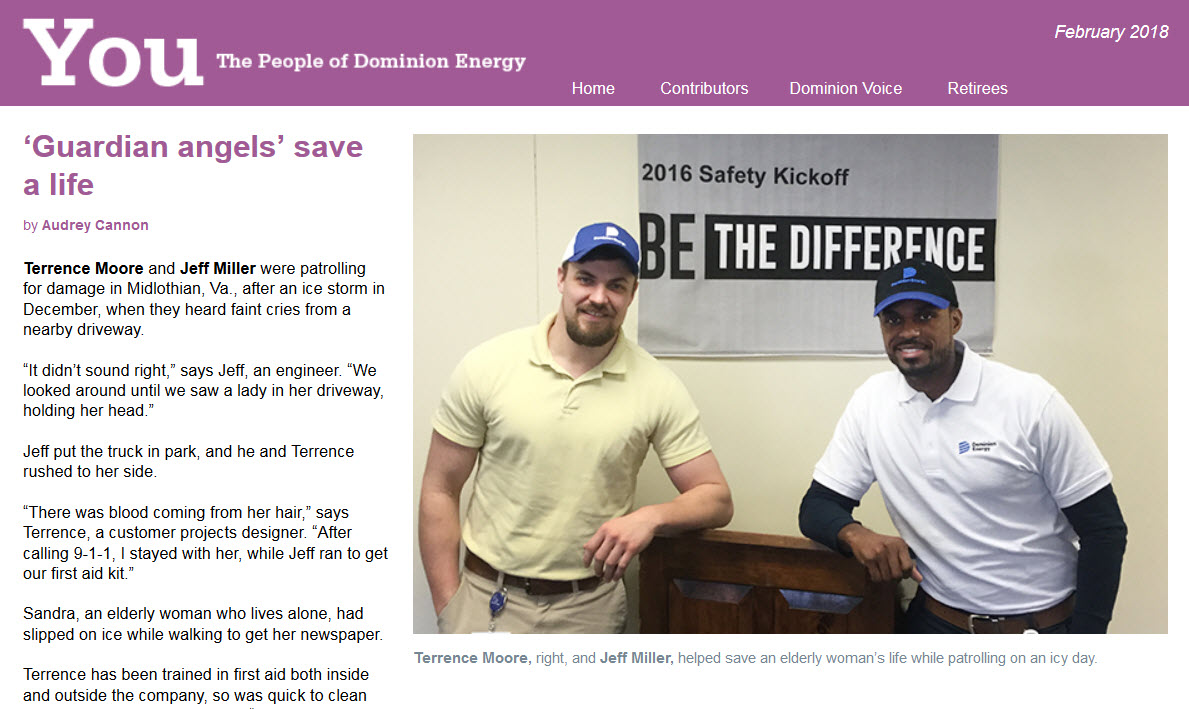 Terrence Moore and co-worker Jeff Miller were patrolling for damage in Midlothian, Va., after an ice storm in December when they heard faint cries from a nearby driveway. “It didn’t sound right,” says Jeff, an engineer. “We looked around until we saw a lady in her driveway, holding her head.”

Jeff put the truck in park, and he and Terrence rushed to her side. “There was blood coming from her hair,” says Terrence, a customer projects designer. “After calling 9-1-1, I stayed with her, while Jeff ran to get our first aid kit.”

Sandra, an elderly woman who lives alone, had slipped on ice while walking to get her newspaper. Terrence has been trained in first aid both inside and outside the company, so was quick to clean and apply gauze to the wound. “And I went through some concussion protocol,” he explains. “She couldn’t remember who she was at first,” Jeff adds.

She gave them permission to go into her house and get her list of phone numbers, but thankfully a neighbor then stopped and helped contact Sandra’s family. They stayed with her until the rescue squad arrived. “We were not going to leave her,” Terrence says. “I wanted her to know she was safe and that everything would be OK.”

He adds, “Jeff was an awesome partner in the situation. We wouldn’t have found her had we not heard her when he rolled down his window to cool off. She was mostly hidden from view. I can’t imagine how many people drove by.”

Terrance and Jeff, who both work in the company’s Petersburg office, were surprised to receive a handwritten thank-you note from Sandra a month later. She thanked them for being her “guardian angels” that snowy day. “Had it not been for your heroic action, I may not be alive today,” she wrote. “My neighbor told me about the special care and gentle assistance given, and I thank God every day for you all.” She ends the note, “You will forever be in my thoughts and prayers.”

Terms of Use   |   © Copyright 2020 American Association of Blacks in Energy. Site by Filnet.